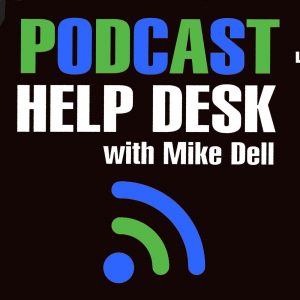 The results are in!  Thank you for those that reported what you saw in your app of choice.

I put different images in different places.
I put a Green logo image in the ID3 tags (embedded in the mp3 file),  A Blue logo image in the RSS image ( Called “iTunes image” in the item level of the RSS feed) A  Green and blue imgage in the body of the post (Featured image) and the feed has the normal Orange logo image for the overall podcast artwork.

Here is what we have found so far:   (will be updated as I get more info)

This is from Episode 129

If you have seen anything different than this list or have another player I didn’t list, let me know.  mike@mikedell.com

Bottom line.   If you are going to put in an episode image.  The best places to do that is in the post (featured image or the first image in the post) and the RSS (iTunes) image at the episode level.   ID3 tag image only shows up in 2 places.   Overcast and “iTunes” desktop (which is dead other than windows and older mac OS).  Maybe still worth doing in the ID3 if it’s not too much work.